Paper Girls #1: SAGA writer BRIAN K. VAUGHAN launches a brand-new ONGOING SERIES with superstar Wonder Woman artist CLIFF CHIANG!  In the early hours after Halloween of 1988, four 12-year-old newspaper delivery girls uncover the most important story of all time.  Stand By Me meets War of the Worlds in this mysterious young adult adventure, starting with a spectacular DOUBLE-SIZED FIRST ISSUE for the regular price of just $2.99! 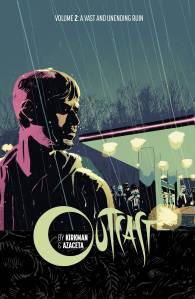 Outcast TP VOL 02: In light of recent revelations, Kyle feels like he’s starting to piece together the answers he’s looking for. But while he feels a new sense of purpose…is Reverend Anderson’s life falling apart? Catch up on the new hit horror series from the creator of THE WALKING DEAD, soon to be a show on Cinemax.

Amazing Spider-Man #1: Spider-Man has gone global! Parker Industries is more successful than ever, with offices in New York, Shanghai, London and San Francisco and Peter Parker is racking up the frequent flyer miles with his “bodyguard” Spider-Man in tow, of course. But success breeds enemies and a reinvigorated Zodiac have also widened their scope to threaten the whole world. Join Dan Slott and Giuseppe Camuncoli as they take Spider-Man to the next level! This huge first issue also includes stories featuring Silk, Spidey 2099, Spider-Woman and much more!

Star Wars: Darth Vader TP VOL 01: The original Dark Lord of the Sith stars in his first ongoing series! Ever since Darth Vader’s first on-screen appearance, he has become one of pop-culture’s most popular villains. Now, follow Vader straight from the ending of A NEW HOPE (and the pages of the new STAR WARS comic book) into his own solo adventures – showing the Empire’s war with the Rebel Alliance from the other side! But when a Dark Lord needs help, who can he turn to? As Vader pursues a very personal vengeance against the Rebels and investigates the Emperor’s secret machinations, he clashes with weapons scavenger Aphra and deadly Battle Droids, and returns to Geonosis to build an army. But some very powerful people don’t want him to learn the truths he seeks! Guest-starring Jabba the Hutt, Boba Fett and more! Collecting DARTH VADER #1-6. 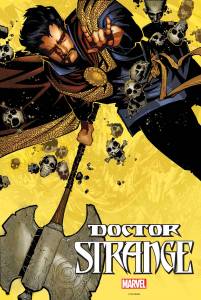 Doctor Strange #1: Who do you call when things are coming out of your dreams and trying to kill you? Or when your daughter is cursing in Latin and walking like a spider? Or when your dog keeps screaming at you to strangle your neighbors? Doctor Strange, of course. He’s the only person standing between us and the forces of darkness, but has he been paying his tab? Every act of magic has a cost and Jason Aaron (THOR, ORIGINAL SIN) and Chris Bachalo (UNCANNY X-MEN) are going to put Stephen Strange through hell to even the scales.

Colder TP VOL 01: Declan Thomas is an ex-inmate of an insane asylum that was destroyed in a fire, he has the strange ability to step inside a person’s madness-and sometimes cure it. He hopes to one day cure his own, but time is running out, as a demonic predator pursues him. Collects the five-issue miniseries.

Survivor’s Club #1: One was possessed by a poltergeist. Another was trapped in a haunted house. A third had a killer doll. Ever wonder what happened to these children of the 1980s? Find out in SURVIVORS CLUB, a new series cowritten by renowned horror novelist Lauren Beukes and videogame journalist Dave Halverson, with art by Ryan Kelly (NORTHLANDERS). Having found each other over the internet, six grown-up survivors are drawn together by the horrors they experienced in 1987 when a rash of occult events occurred around the world-with fatal results. Now, there are indications that it may be happening all over again. Is it possible that these six aren’t just survivors-but were chosen for their fates?

Nailbiter TP VOL 01: “Where do serial killers come from?” and why has Buckaroo, Oregon given birth to sixteen of the most vile serial killers in the world? NSA Agent Nicholas Finch needs to solve that mystery in order to save his friend, and he’ll have to team up with the infamous Edward “Nailbiter” Warren to do it. JOSHUA WILLIAMSON & MIKE HENDERSON deliver a mystery that mixes Twin Peaks with the horror of Se7en