DC Bombshells #1: The ultra-popular statues from DC Collectibles come to life in their own ongoing comic book series! Learn the story behind this alternate reality where the Second World War is fought by superpowered women on the front lines and behind the scenes! It all begins with the stories of Batwoman, Wonder Woman and Supergirl.

Buzzkill TP VOL 01:Ruben is not your average alcoholic; he’s an unstoppable superhero who derives his powers from imbibing massive amounts of alcohol. After all the disasters his addiction has caused, he’s ready to get clean. When he joins a twelve-step recovery program, the city’s supervillains couldn’t be happier! Collects issues #1-#4 of the series.

Judge Dredd America TP: In Mega-City One, the Judges are the law, acting as judge, jury, and executioner. But how do the citizens really feel about a system where they are powerless? America Jara and Bennett Beeny grow up as best friends, living a fairly trouble-free life in a dangerous city… bar the odd encounter with a Judge. Time draws them apart, and when they are brought back together, Beeny is a successful singer and America has become involved with a terrorist organization – with the Judges in its sights! 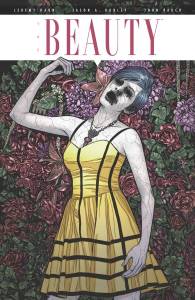 Beauty #1: THE PILOT SEASON WINNER RETURNS!
Modern society is obsessed with outward beauty. What if there was a way to guarantee you could become more and more beautiful every day? What if it was a sexually transmitted disease? In the world of The Beauty, physical perfection is attainable. The vast majority of the population has taken advantage of it, but Detectives Foster and Vaughn will soon discover it comes at a terrible price!

Low TP VOL 01: Millennia ago, mankind fled the earth’s surface into the bottomless depths of the darkest oceans. Shielded from a merciless sun’s scorching radiation, the human race tried to stave off certain extinction by sending robotic probes far into the galaxy, to search for a new home among the stars. Generations later, one family is about to be torn apart, in a conflict that will usher in the final race to save humanity from a world beyond hope.

Dive into an aquatic fantasy like none you’ve ever seen before, as writer RICK REMENDER (BLACK SCIENCE, Captain America) and artist GREG TOCCHINI (Last Days of American Crime) bring you a tale mankind’s final hour in the cold, deathly dark of the sea. 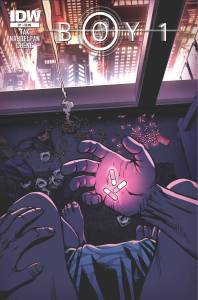 Boy1 #1: In the fast-approaching future, when the drug-addled heir of a genetic-engineering company begins to investigate his company’s murky past, he discovers he is the catalyst in a terrifying global event that will transform him and forever alter the course of human evolution.

Outcast TP VOL 01: Kyle Barnes has been plagued by demonic possession all his life and now he needs answers. Unfortunately, what he uncovers along the way could bring about the end of life on Earth as we know it.